I have been given this product as part of a product review through the Chronic Illness Bloggers network. Although the product was a gift, all opinions in this review remain my own and I was in no way influenced by the company.

“You get to work from home! That’s so great!”

Whenever people say that, I never know how to respond.

Like, yeah, of course, it’s great to be home all the time… I guess. I forget what day of the week it is. I wear sweatpants. I shower when I want to shower. I work in the living room from my recliner or in the office, whichever is more comfortable. The television is on for “background noise.” I keep the cat and bunny from murdering each other.

I also have very little human interaction other than Slack, Gchat, Facebook, or email. I’m a slave to the elements, meaning my Quell says, “Today’s weather may worsen your pain. Consider increased Quell use.” I’ve gotten that warning for the past two weeks straight. If it’s cold or raining, I stay inside. Sometimes I stay inside for days at a time if the weather is against me. It’s like living in a hamster ball. 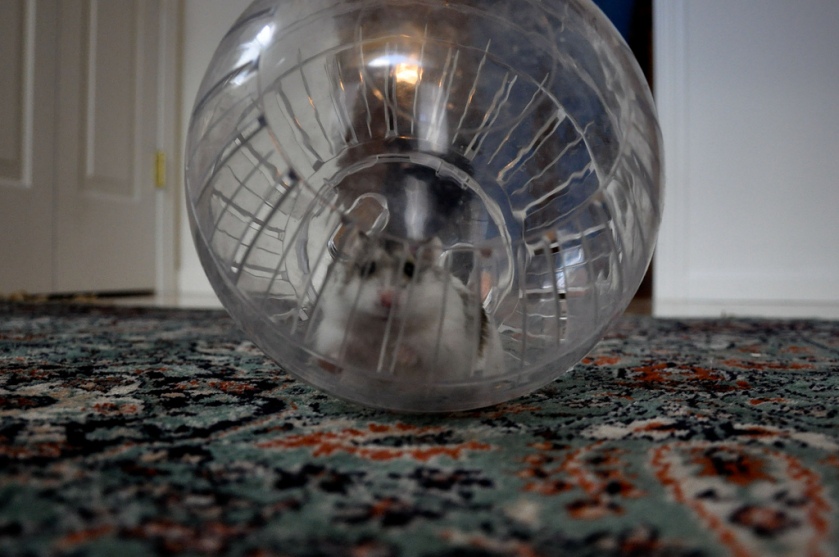 Meeeeeeeeee! Photo by jackiembarr on VisualHunt.com / CC BY

God, can you imagine roaming around the neighborhood in a hamster ball? That’d be amazing. I’d be legendary.

ANYWAY. It’s been hard to work from home recently, mainly because I’ve been wiped out. My body has been rejecting the concept of work, and I have been in increased levels of pain — a month-long flare that has incapacitated me. I took on an extra project that had me running around far more than usual, going into the city and driving and interviewing people, and afterward I had the biggest flare I’ve had in years. The recovery has been, shall we say… difficult.

I’m looking for alternative methods of pain control. For a few months now I have been doing a workout program that I quite enjoy called Zero to Hero, which was created by Megan Densmore. She suffers from fibromyalgia, not that you’d ever be able to tell from her incredibly well-sculpted body. She competes in kettlebell tournaments and stuff. She created this 12-month online program for people with chronic illnesses who need guidance with their workouts. And yes, I got the first part of the program for free in exchange for the review. But my God, look at her. She’s her own testimonial.

“I designed this program specifically for people who have received a chronic illness diagnosis and who have been told that exercise would be helpful in managing their symptoms and increasing their energy level. I find this recommendation is given liberally but there are almost no actual tools to take this advice! Zero to Hero also works well for people who have chronic pain from injuries and some forms of arthritis (when physical therapy has been completed and individuals have been cleared for mild exercise).”

I want to look like that. I don’t yet. I’ve been doing the program for a few months now, and each video is about seven to ten minutes long. And they are difficult. For normal people (healthy people), they probably wouldn’t be very hard. See, the problem for those of us with chronic conditions is that we start exercising, and then we hit The Wall. We get all excited, we get our gym memberships, we buy all the clothes, we do good for maybe a week or two — and then we hit an all-consuming exhaustion and level of pain we didn’t realize was possible. Then we stop exercising and revert back to our sloth-like states.

Megan understands The Wall because she’s been there. Normal people don’t hit The Wall.  They get sore and tired, sure. But they don’t feel body-wide exhaustion and pain. She’s designed this program to be slow enough and gentle enough that we can kind of… edge around The Wall and keep trotting down the road.

I’ll definitely be continuing the program past what has been made freely available to me. I want to look like that. More importantly, I want to feel better. And honestly? I can tell my flare would have been worse if I hadn’t have been doing these workouts, because now I actually have some sort of core muscle strength to keep me stabilized. I looked in the mirror the other day and was like, “What are those? Is that… Are those muscles?” I actually have some semblance of a core now. For a while I was confused and thought it was just some extra flab, but nope — it has some definition. There’s a purpose to it. I AM ON MY WAY TO BEAST MODE.

Megan has been able to control her fibromyalgia symptoms for a number of years now and live the life she wants to live. I want to do that, too.