Here’s my latest column for the Pain News Network!

Loyal readers, I have returned.

It’s been a tumultuous month of bad days and flares, so while I was absent from my writing duties, I was trying out a hodgepodge of products designed to offer pain relief.

Naturally, none of them worked. Let’s discuss.

A while ago it was suggested that I try the ActiPatch. I was originally introduced to this new form of pain product by Lil’ Bub, the celebrity cat.

I should probably explain that.

Lil’ Bub, full name Lillian Bubbles, is a perma-kitten, meaning that she will retain her kitten-like characteristics for her entire lifespan. She also has an extreme case of dwarfism and a rare bone condition called osteopetrosis (the only cat in recorded history to have it), which causes her bones to become incredibly dense as she grows older. This causes pain and difficulty when she tries to go from Point A to Point B. 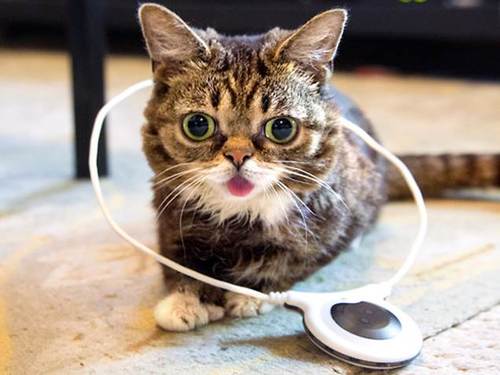 Her person, called the Dude (like Jeff Bridges in “The Big Lebowski”), discovered the Assisi Loop, which is designed to treat pain and inflammation in pets. The device uses targeted PEMF technology (or pulsed electromagnetic fields) to induce healing within the area of the plastic “loop.” Before starting her treatment, Lil’ Bub was becoming stiffer and less mobile.  But two years of therapy later, she’s running, jumping, and acting like any other cat.

Fast forward to the present day and the explanation as to why I am talking about a cat. ActiPatch is the version of this for humans. I received a letter and package from the president of BioElectronics that contained a thick wad of research and loops for my back, knees, and muscles/joints. I tossed the ones aimed for knees to my husband and kept the rest for myself. Because I’m selfish.

The ActiPatch loops manipulate the body by means of electrical signals, much like TENS devices. The field created within the loop “induces an electrical field in the target tissue,” as  Andrew Whelan stated in his letter to me. These fields affect nerve fibers and cellular function by increasing blood flow and decreasing inflammation, thereby reducing pain. Additionally, as Mr. Whelan said, the field is “periodically amplified by the background energy within the target tissue, a process called stochastic resonance.” This is when unpredictable fluctuations, or “random energy,” cause an increase in the signal transmission.

During their “Try and Tell” rollout campaign in the U.K. and Ireland, more than 5,000 responded to a survey of trial devices that were sent to interested individuals for only the cost of postage. The company claims there was a “consistent response” of 52 percent reporting sustained pain relief.

Back in my world, I encountered a few problems when trying out the ActiPatch. My pain, as I have mentioned before, is both widespread and diffuse. There are specific areas of genesis, but the pain is by no means contained to just my spine. I have injuries to my cervical, thoracic, and lumbar spine, but the sections with the “loudest” pain tend to be my shoulders, the sides of my neck, my ribs, and my low back. These loops, which are only about the size of a small plate, could not possibly reach all these spots. I’d look like a rubber band ball.

During my trial run, I decided to place the loops both in the “genesis areas” (IE, over my spine directly) and on my shoulder blades. Getting the loop to fit over the curve of my trapezius muscles was difficult. The loops came with a box of Band-Aid-like stickers to hold the loops in place, and I made quite the mess attaching all of them to my skin. Once the loops are placed, however, you simply press a button on the little magnet, a green light comes on, and off you go.

I pulled my shirt on over everything and encountered another issue: the green lights of the loop batteries showed through my shirt, as did the loops themselves. I looked like an undercover informant with poorly-hidden wires. The mafia would surely figure me for a rat. The solution: many layers! 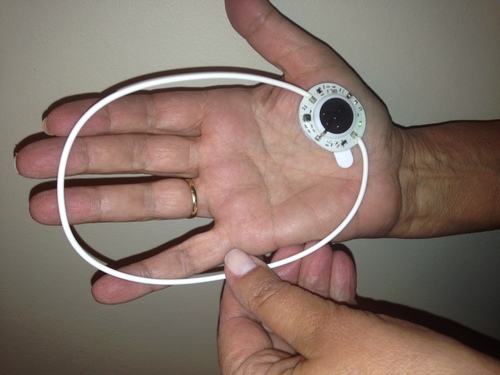 Not my hands. The nails are too nice.

The day I chose for my test run was a normal weekend day. I hadn’t planned anything strenuous and no activities were going to be out of the ordinary. I didn’t wear my Quell, and I also left off the roll-on Stopain that I usually slather on every day. I wanted a day where I could control the variables in order to test the efficacy of the device. My husband and I ran our weekend errands and then decided to take a short walk out in nature.

My first observation: I did not feel anything from the devices themselves. Others who have used the ActiPatch have told me they felt the sensation of heat within the area of the loops. I didn’t feel anything. I have decreased sensitivity in many areas of my body anyway, so that was not surprising. Additionally, the ActiPatch website states that there will be no sensations.

My second observation: The areas outside of the loops hurt more than normal. I don’t know how good the devices are at affecting areas other than what is in the confine of the loop. The space within those circles felt like a black hole, which is better than pain. While something was definitely going on in the loops — when I took them off at the end of the day, those areas were red, appearing almost sunburned — I don’t feel like it helped my widespread pain to any significant degree.

My third observation: I ended up crashing far earlier than normal. By early afternoon I was in my recliner and taking heavier medication.

My hypothesis: The ActiPatch device is probably great for somebody with an injury that is clearly restricted to a certain area. For instance, my husband hurt his knee while running. The loop would be able to focus on that since the pain does not radiate out all over the body.

For somebody like me (an anthropomorphic bruised banana), the loops are far too small. I would need a hula-hoop-sized device in order to make a dent in my daily pain.