I am trying to better protect my body, which means trying new things in order to build a stronger shield on all fronts. My father found a powder supplement called “Arthroben,” which is generally used for those suffering from arthritis and other inflammatory conditions. For some reason the company decided that their original flavor should be green apple, so it tastes like I’m eating a Jolly Rancher (yes!) that I dropped in the sand (no!). I have also increased my Cymbalta by 20 milligrams, which I’m not thrilled about, but hey, what can you do.  Judging by my Pain Tracker instead of my shoddy memory, it’s been a fairly good week. Once I stabilize on the new dosage of Cymbalta, I will attempt to transition off the 2oo milligrams of Lyrica that I take each day.

Soon I’ll be getting rid of some of these fargin’ sneaky bastiges! (Ten points if you get that reference.)

I am also strengthening my body to the best of my ability. After a week of no exercise because of being symptomatic, I am easing back into my morning swimming routine where I doggy-paddle (or I do Aqua Aerobics with the old ladies and token old gentleman, which is actually super fun).

The evenings are difficult because I’m generally wiped out after working all day. This exhaustion is more to do with sitting for hours at a time and the commute; even though I have a kneeling chair and a recliner in my office (because my bosses are awesome), I’m usually in some sort of spasm by the time I get home. However, I still try to do gentle restorative yoga, and now I have the Body Blade, which was also suggested by my father (he started in athletic training before transitioning to physical therapy and then integrative manual therapy and now his own new holistic work). It’s essentially a yard stick that you shake, and the vibration coupled with resistance engages the muscles. I thought it was ridiculous until I used it for ten minutes and woke up the next morning feeling sore in all of those places. So hey, new toy!

I have also come to realize that my mood has a significant effect on my physical state. This past Memorial Day weekend was spent unplugging from work and having amazing adventures with Husband. It was fabulous, and I felt great despite my body’s chronic quirks. We went to lovely restaurants, tromped through nature, played at a farm, explored Walden Pond, watched movies, and just enjoyed each other’s company. It makes me want to dedicate time each day to unplugging. Just being. 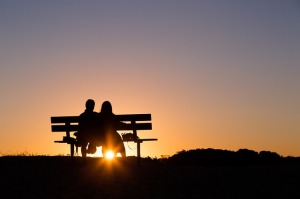 We are sickeningly adorable. Also, this isn’t us.

This past weekend also meant FOOD. Lots of food. We went to our favorite restaurants, found a new vegan/gluten free place, and ate all the junk we normally would not because we were on staycation. We needed no justification and ate to excess. But now, on the other side of staycation, I see the huge amounts of sugar I was eating. I have long known that I am unable to control myself around sugar and carbs. When I eat dinner, I have to end on something sweet. When I unwind in the evenings, I find myself in the kitchen two or three times. This is not a good pattern for me, mainly because sugar is so inflammatory, it adds to my waistline, and it hides in literally every damn thing I like to eat. I need to cut back. Excess weight on my frame only hurts my back, and sugar only burns my nerve endings.

This is my mind whenever I try to meditate.

More than just protecting myself, I want to be nice to myself. I want to be friends with my body. I view my pain as a separate, distinct entity. For instance, when I was swimming this morning I felt an alarming twist in between my shoulder blades. I eased out of the movement and asked myself, “Okay, what’s going on there? It’s all right, calm down.” And I realized that I was talking to this pain as if it were someone else. This is me. 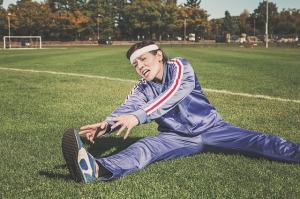 I said in a previous entry that I am not my pain. However, I am my injuries. I am this body. And that’s okay. I can do my best with this body. Kim Manfredi, a successful yoga teacher whose story is eerily similar to mine, said it best: “I am my injuries and my brokenness is what makes me… me.” She knows that her spine, broken in four places at age 18, cannot perform certain movements. It’s just a fact. Her right leg is partially paralyzed as well, but that doesn’t stop her from running seven yoga studios and practicing daily. She finds the magic within the movements, the beauty within the strictures.

This is not Kim, though I imagine Kim has moves that are even more gorgeous than this one.

More importantly, she has moved past her anger. I sent Ms. Manfredi an email months ago explaining my situation and how poisonous rage was coiling through me. First of all, she wrote back — which was awesome. She said that it has taken her thirty years to begin to write about her pain, and not to worry if some days the symptoms flare and you can’t practice yoga or swim. Some days are good. Some days are bad. Some days are “meh.” You move through them. Considering I have gotten through 100 percent of my bad days, I’d say my chances of continuing that streak are good.

I still complain sometimes. I still get into black depressions. I still ask the universe why this happened to me and not to, say, someone in the Westboro Baptist Church. But now I’m writing about it. I’m reflecting. I’m being mindful. I’m breathing into my pain. I breathe it out. I am moving forward.